Update 02/03/2020 - the documentation error has since been fixed, and Microsoft has reached out to me for a full refund. Every engineer I’ve talked to from Microsoft has been nothing but wonderful, but the official support channels are still slow (we’re talking weeks). I’m satisfied with the conclusion to this, even though I still maintain that the API choice is pretty questionable

Or the alternative title, “How Microsoft shot me in one foot, and then gave me a gun so I could shoot my other one”

Custom Filtering - or the time Microsoft shot me in the foot

Azure Application Insights is an Azure service to help you monitor your applications. It collects log, http requests, exceptions - you name it. It then allows you to view this data in numerous ways, some of them rather clever.

With prices this expensive, you’ll probably only want to collect the data you’re actually interested in. In our case, we’re using Azure Event Hubs, and the Azure SDK for that is very chatty with it’s http requests, particularly when processing hundreds of messages every second.

Application Insights doesn’t make excluding data to send easy, but it does make it possible. In the Application Insights C# SDK, you can write what’s called a Telemetry Processor, which can process, or discard telemetry before it’s sent to the server.

You can configure Application Insights with your custom processor like this example from the official docs:

Notice the last line. So I went right ahead and implemented a telemetry processor that blocked the torrent of data, and hooked it up like the example here demonstrated.

This is where Microsoft shot me in the foot. The example there, is flat out wrong. The builder.Use() statement does nothing, if called after the .Build() statement. I did think the order seemed odd, but the whole API is a little strange so I figured this was just another quirk.

Turns out, it wasn’t, and following the documentation exactly, lead to us sending a torrent of expensive data to application insights. It’s not all bad yet though! Application Insights knows it can generates a boatload of data. To prevent that, it has a feature called Adaptive Sampling

Adaptive Sampling - or the gun Microsoft gave me

Seemingly a good idea considering the price, but if you’re trying to trace a request among multiple services, having some of the logs thrown away is impossible to work with.

So naturally, I wanted to disable this for logs, (or traces as they’re called in Application Insights). Now here’s another questionable API decision. The way you configure adaptive sampling in .NET Core is: 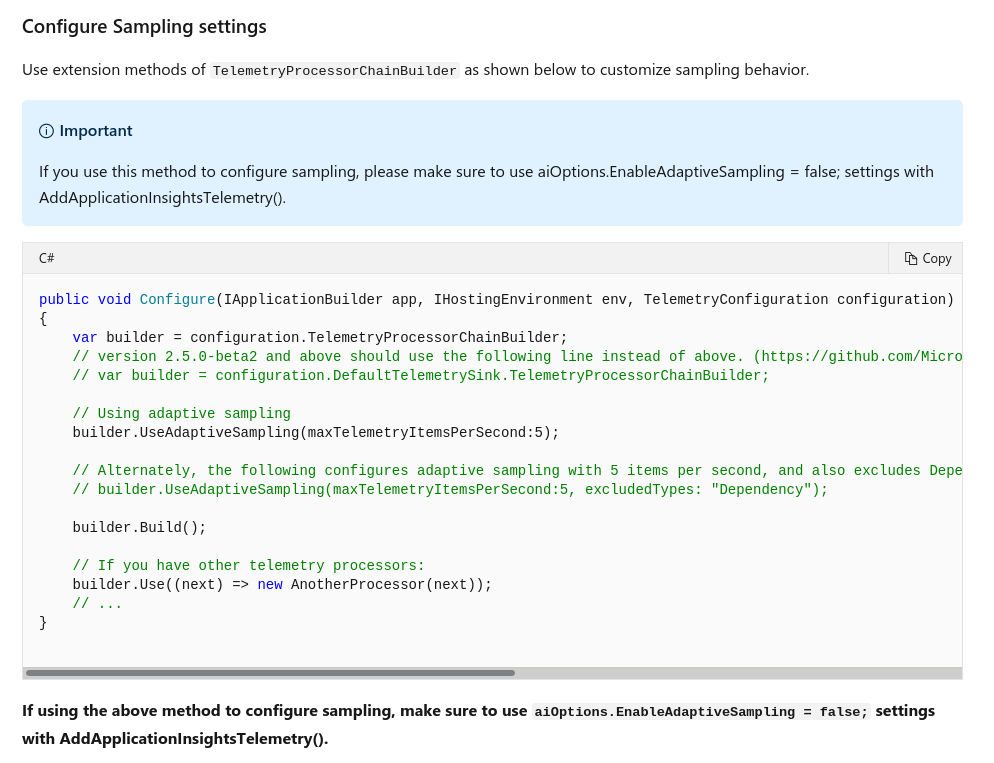 Have you tried turning your Adaptive Sampling on and off again?

So this is what I did:

Can you spot the difference? I certainly thought I was doing 1:1 what the documentation said for a long time.

ASP.NET Core heavily uses the Options pattern, which is how to inject configuration into your classes. You inject an IOptionsMonitor<YourClass>, and though that you get the configuration classes. So that’s what I did, and it seemed to work fine. I got, seemingly, a fully functional TelemetryConfiguration. However, when updating this particular instance of the TelemetryConfiguration, nothing actually changed - as it was completely decoupled from the rest of the Application Insights infrastructure.

That’s the gun Microsoft handed me. That to configure the adaptive sampling, I had to turn it off and on again - and that you can turn it on wrong!

I’ll admit it, I shot myself in the foot, not following the documentation to the letter, but I maintain that when configuring a feature with a potentially huge cost impact, “turn it off and hope you manage to turn it on right afterwards”, is really shoddy API design.

Now, thank God, Application Insights does have a pre-configured limit of 100GB a day, which means by default it won’t ingest more daily data than that. This was some relief from the perfect storm of my TelemetryProcessor not working due to Microsoft’s documentation, and the adaptive sampling being turned off, due to my own inability to follow instructions. It meant that we could be billed at the most ~300$ a day (which to be honest, is also a little obscene for logging).

Unfortunately, we don’t look at our cost statements every day, and we deployed this right before Christmas…